Václav Klaus, the president of the Czech Republic. One of the few heads of states who dare to question the pseudoscience of climate alarmism. 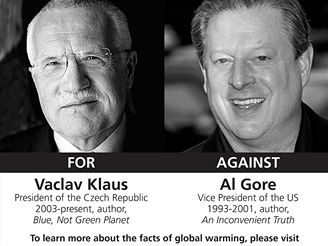 These ads were published in New York Times, Washington Times and Wall Street Journal in 2007 before his speech at the UN in New York. In the spring of that year the Czech president's testimony was requested by the US Congress, just like the testimony of Al Gore. Klaus challenged Gore several times to debate, but Al was too afraid.

Klaus 2007 testimony in US Congress

Klaus 2007 speech at the UN Climate Conference in New York

Klaus 2010 speech at the Club for Growth

Author of the book: "Rationally on Global Warming"

Listed among the cca 700 dissenting scientists in the senator Inhofe's list (Minority Report: document of the US Senate). See here. Download the Minority Report here.

I had the honour of attending a Czech senate testimony before the European Affairs Committee along with prof. Kutílek.

We are both members of the Czech Skeptic's Club (branch of the CSI) www.sisyfos.cz

Luboš Motl is the co-author of the renowned 2009 NIPCC Report. The alternative to the discredited IPCC 2007 report.

Petr Chylek, a climatologist in Los Alamos (emigrated from Czechoslovakia  to USA after the Soviet invasion)

He is known for his Open letter to the climate research community. After Climategate he urged the scientists to get rid of alarmism and return to science.

BTW: His research of Greenland shows, that there has been no net ice melting since 1940 - on the contrary, there is more ice there now.

Ivanka Charvatova, a Czech astronomer from the Czech Academy is the best known heir to the famous Rhodes Fairbridge's theory about how gravitational pull from planets affects the inertial movements of the Sun, solar activity and thus the Earth climate. Also Landscheidt is known for advocating this explanation of the changes in solar output.

Read for instance this article: "Until about 2040, the motion of the Sun will be chaotic and similar to that of the second half of the 19th century. Analogically to the previous situation, lower solar activity, occurrence of huge volcanic events and lower surface air temperature (maybe up to the turn of the century level) could be expected in the next decades. The ST-periodicities within 7 and 15 years could turn into the chaotic D2-type.The results support the view that climatic changes could be caused above all by natural variability."

George Kukla, a Czech climatologist, who emigrated to USA after the Soviet invasion

It was him who - along with Matthews - started the "global cooling" scare in 1970s.  See his Wikipedia entry. Kukla believes, that the 1975-98 warming was mostly natural. And he warns, that this climate change impact is negligible compared to the impact, which a comeback of - natural, not manmade - ice age would bring. Nobody knows, when our interglacial is going to end - it may be after another five thousand years... or the next decade.

An article about Kukla in Nationalpost: Forget warming - beware the new ice age

Have you seen Durkin's Great Global Warming Swindle? Do you remember Nir Shaviv, the climatologist from Izrael? His main research partner is a Slovak scientist Jan Veizer, born in the former Czechoslovakia, now teaching at a university in Canada. Their research shows, that climate on Earth is controlled by changes in solar output/cosmic radiation. And these changes come in regular cycles. One of these cycles is cca 150 million years long. Which disproves the nonsense, that dinosaurs were killed by a sudden unexpected global warming due to internal on-Earth mechanisms.

An English article about Veizer here. A scientific study about the cosmic radiation cycle here.

In 2009 Micronesia challenged the Czech Republic to stop the extension of its largest coal power plant. The argument was, that it might contribute to flooding of Micronesia. Which is absurd. Even if CO2 forcing was strong, the Czech coal plant might contribute by not more than several microns to sea level rise.

In 2009 the Ministry of Environment fired Mr. Pretel from the position of the "IPCC focal point". It was a punishment for his expert opinion about the "Micronesia versus Prunerov Coal Plant" case. A clear example, how environmentalists intimidate and silence scientists. An extensive lists of English articles on this case here.

Remember. The famous Greenpeace article threatening the skeptics "we know, where you live" was dedicated to this very Czech Prunerov-Pretel case.

You can read this green jewel here.